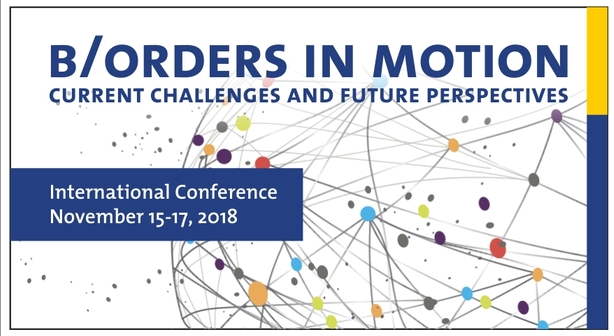 Background of the conference

In times of successive acceleration of societal transformation processes, the shifting, dissolution, and consolidation of borders and social orders have moved into the center of public and academic attention. Within this context, not only territorial-political demarcation processes of nation-state borders are of central interest but also social, cultural or temporal demarcations (boundaries). Around the globe, practices of de-bordering through transnationalization, globalization and economic interdependence, on the one hand, and practices of re-bordering as a response to increasing migration flows, re-nationalization and protectionism, on the other hand, take place at the same time and illustrate the omnipresence of often paradoxical demarcation processes. To investigate the dynamic interplay of borders and social orders in today´s society has been the main driving force of the Viadrina Center B/ORDERS IN MOTION which was founded at the European University Viadrina Frankfurt (Oder) at the German-Polish border. On the fifth anniversary, the interdisciplinary research center has organized the international academic conference “B/ORDERS IN MOTION – Current challenges and future perspectives” which took place on 15 – 17 November 2018 in the border towns of Frankfurt (Oder) (15 November) and Słubice (16-17 November) and which was visited by more than 100 researchers from 18 countries. Emanating from completed and ongoing research at the Viadrina Center B/ORDERS IN MOTION as well as from current and future-oriented developments within border and boundary studies, the conference has theoretically and empirically been focusing on four thematic streams:

These thematic fields were conceptualized as streams and each stream was composed by three panels. Together with two round table discussions, a key note lecture and a poster session on research projects addressing topics within the research field of B/ORDERS IN MOTION, these overall 12 panels represented the forums of discussion of the interdisciplinary conference in Frankfurt (Oder) – Słubice. Outline of the conference

The three-day conference has been opened by CLAUDIA WEBER, director of the Viadrina Center B/ORDERS IN MOTION at the European University Viadrina and the vice-president for research at the Viadrina, MARTIN EISEND. This was followed by an introduction into the work at the Center and the analytical interrelations of borders and orders by CAROLIN LEUTLOFF-GRANDITS, the scientific coordinator of the center. In his key note presentation on “Sealing Borders? Rethinking Border Studies in Hard Times”, SANDRO MEZZADRA (Bologna) gave a personal insight into his approach to borders and related this to the changing configurations of borders which especially affect migrants. He stressed that the border is not a “thing” but rather a construct of social relations which can consist of a multiplicity of boundaries – be they linguistic, cultural, legal or economic – which organize but also crisscross different social orders. He outlined his special research interest in processes of proliferation, heterogenization and reinforcement of borders and their entanglements with the practices of border crossings. Giving special attention to the simultaneous processes of selectively softening and hardening as well as opening and sealing of borders for different kinds of flows, he proposed to deconstruct the notions of borders as simple protection walls and to document the changing and ambivalent character of borders. Last but not at least, he reminded border scholars on the need to take sides, as border regimes appear to be extremely violent towards “unwanted” crossers, and even criminalize “humanitarian interventions” of NGOs who try to help those who are about to die in their attempts to cross borders. He concluded that the border remains a crucial site of research, as the changing global (and local) order and its new political economy that proceeds with people according to a logistical rationality serving capitalist interests, crystalize at the border.

Round Table on “B/ORDERS IN MOTION – Current Challenges”

The first round table on “Current Challenges” addressed pressing questions concerning contemporary b/order arrangements on the one hand and possibilities and obstacles for scientific inquiries on the other hand. According to the historian BEATA HALICKA (Poznań), who stressed the importance of the temporal dimension of border- and boundary-making, changing historical borders, forced migration, the appropriation of culture and the re-allocation of borders have a sustainable impact on societal orders. Especially with regard to Central and Eastern Europe, she highlighted that research on borders and orders in motion should emphasize also aspects of how to deal with multi-ethnic groups and sociocultural boundary-drawings. For the historian and border researcher MARTIN KLATT (Sønderborg), borders are products of social practices or power relations. With regard to borders, Klatt proposes to focus more on people in borderlands and on the social impact of bordering processes, rather than on the notion of “flows” as it has been common in border(land) studies. Conclusively, he states that the border studies community is still weakly developed and needs comprehensive transnational research projects to further evolve this scientific field. PAOLO CUTTITA (Amsterdam, Kiel) illustrated the achievements of critical migration research by highlighting the important insights that concepts such as the “border regime” had provided to critical border studies. Yet, he criticized the EU-centristic view in research on borders and orders in motion and called for overcoming this eurocentrism in researching borders. Research on borders should grasp the multicomplexities and fragmentations of borders, as well as the border imaginaries and functions for different people.

The three panels within Stream A “Un/Making Borders and Boundaries” dealt with different perspectives on and dynamics between social and symbolic boundaries. Within the panel „Borders, Boundaries, Categorizations“ (A1), organized by DOMINIK GERST (Duisburg-Essen) and MARIA KLESSMANN (Frankfurt/ Oder) the speakers aimed at discussing boundaries as categorial distinctions and related categorial ordering work facilitated by (state-)borders and shed light on the organization, emergence and dynamics of the relationship between borders/boundaries and categorizations. The panel „Blurring Boundaries from a Trans*Researching Perspective“ (A2) organized by MAREK SANCHO HÖHNE (Frankfurt/ Oder) and JOSCH HOENES (Oldenburg) focused on the contribution of sexuality, masculinity and femininity to the formation of national and cultural entities. The presentations uncovered the processes of drawing boundaries around race, gender, class or origin from the perspective of cultural anthropology. The concluding panel “Un/Certain Borders. Practices, Affects, Experiences” (A3) organized by CONCHA MARIA HÖFLER (Durham) explored the observation that borders and boundaries - intentionally or accidentally – are created by or constitute un/certainty.

Stream B on “Borderless Labor – Labor across Borders” started with the panel “The Effects of Bordering Practices in the field of Labour Law Enforcement” (B1) organized by NORBERT CYRUS and EVA KOCHER (Frankfurt/ Oder). The talks outlined that state borders constitute and demarcate territories characterized by discrete jurisdictions and uneven economic performances. The second panel chaired by JOANNA BRONOWICKA (Frankfurt/ Oder) was interested in the “Collectivization of Interests across B/Orders in Gig Economy Platforms” (B2) and aimed to examine how the platform economy challenges and re-defines traditional b/orders of employment structures and how labor organized across borders is affected. The final panel on “Mobilization along Global Value Chains – the Gender Dimension” (B3), chaired by ANNA HEINEN (Frankfurt/Oder) focused on the diverse ways in which gender is implicated in global production and explored challenges to gender inequalities in global value chains.

The third stream on “Migrating Borders & Boundaries” (Stream C) focussed on the interplay of migration and border/boundaries. It started with the panel “Forced Migration – Border Regimes. The Balkan Experiences 1990-2010s” (C1) organized by CHRISTIAN VOSS and SNEZANA STANKOVIC (Berlin, Frankfurt/ Oder). The four talks addressed integration and exclusion processes of migrants within the coexisting local communities in the Balkans. The presentations within the second panel of stream C on “Institutions of Migration Control: State Borders and the Diversification of Rights” (C2) by NORBERT CYRUS and DAGMARA JAJESNIAK-QUAST (Frankfurt/Oder) discussed the diversification of migrants’ rights and ambiguity of technological tools in relation to state borders. Finally, the panel “Migrating Borders & Boundaries” which was organized by KONSTANZE JUNGBLUTH (Frankfurt/ Oder) dealt with the “Reconfiguration of Language Boundaries: Exploring the Spatial and Temporal Dimensions of Liminality” (C3) and explored the re-establishment of collectivity through linguistic interaction and boundary-drawing from different (socio)linguistic perspectives.

Stream D on “Territorial Borders: The institutionalization of crossings” started with the panel “State Borders and Technology in Europe: Between Transgression and Fortification” (D1) organized by FALK FLADE (Frankfurt/ Oder) and ARISTOTELIS TYMPAS (Athens) which aimed at discussing the relationship between state borders and technology inside the EU as well as in the European peripheries. In the panel “Exploring the Formation of State Borders in History” (D2) organized by KLAUS WEBER and NORBERT CYRUS (Frankfurt/ Oder) a historical exploration of the occurrence of various functions of a state border has been chosen in order to develop a more consistent understanding of state borders’ features and of the complexity of their arrangements by offering historical case studies of city- and state-bordering practices. The final panel of the conference “Conditions, Challenges and Perspectives for Cross-Border Cooperation in Europe” (D3) organized by MARCIN KRZYMUSKI and PETER ULRICH (Frankfurt/Oder) dealt with the specific domain of EU territorial cooperation at the inner-EU borders. The discussants emphasized the current state of the art of territorial cooperation in Europe, identified obstacles and sketched some perspectives for territorial cooperation in Europe.

Round Table on “B/ORDERS IN MOTION – Future Perspectives”

In the concluding round table on future perspectives in the research field of B/ORDERS IN MOTION chaired by HANNES KRÄMER (Duisburg-Essen), CHIARA BRAMBILLA (Bergamo, Milan), SABINE VON LÖWIS (Berlin) and BURCU TOGRAL (Erkner) discussed future theoretical and methodological conceptions in the fields of b/order studies. CHIARA BRAMBILLA (Bergamo, Milan) started her analysis by focusing on b/orders as an interdisciplinary field that experiences obstacles due to diverging terminology in the different disciplines and would need a stronger alignment of concepts and heuristics for the public dissemination of research outputs. In general, she identified a complexity shift in b/order studies as borders symbolize different epistemic systems for different subjects and bear also temporal dimensions, an aspect which needs to be further researched. SABINE VON LÖWIS (Berlin) claimed a stronger focus on the temporality of borders in the sense of the impact of historical territorial borders. Contested borders in Europe show that territorial borders have shifted and that these changes caused conflict and border disputes. Beyond that, the research on “phantom borders” has shown that former territorial borders are sustainably affecting and are efficacious on social orders, which needs to be studied in more detail. BURCU TOGRAL (Erkner) who researches bordering processes in relation to refugees from Syria in Turkey and Germany, asked that we need to take a closer look at the bordering processes and the actors who are drawing or shifting these borders/boundaries. This includes the agency of administrators and migrants. With regard to the research on borders and migration, she proposed a research focus “towards more subjectivity” with focus on the personal experiences and effects of bordering practices.

The conference “B/ORDERS IN MOTION: Current Challenges and Future Perspectives” has been organized in the framework of the fifth anniversary of the Viadrina Center B/ORDERS IN MOTION in Frankfurt (Oder). The interdisciplinary conference mirrored the ambitious research that has been carried out at the center in the previous years by conceptualizing four streams which embody the fields of theoretical and methodological considerations of borders and boundaries, cross-border labor, migration and cross-border institutions and governance. Because of the different research foci, it appeared to be challenging to handle diverging theories, heuristics, methodological considerations and terminologies beyond the different streams and panels and to obtain a vibrant and fruitful discussion. Yet, to bring these different disciplines together, the approach of combining the classical border(land) and boundary studies, as well as the approach that focuses on the interrelation of borders and the establishment or shifting of orders appeared to be especially helpful.

You can find another report of the conference at the Viadrina-Logbuch (in German).
Download (pdf) 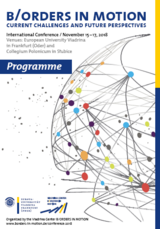